The statutory two-tier company is a special form of company that can apply to the NV and BV (as well as the cooperative). It is often thought that this only applies to internationally operating groups with part of their activities in the Netherlands. However, this does not necessarily have to be the case; the structure regime can become applicable sooner than one would expect. Is this something that should be avoided or does it also have its advantages? This article discusses the ins and outs of the statutory two-tier company and enables you to make a proper assessment of its effects. 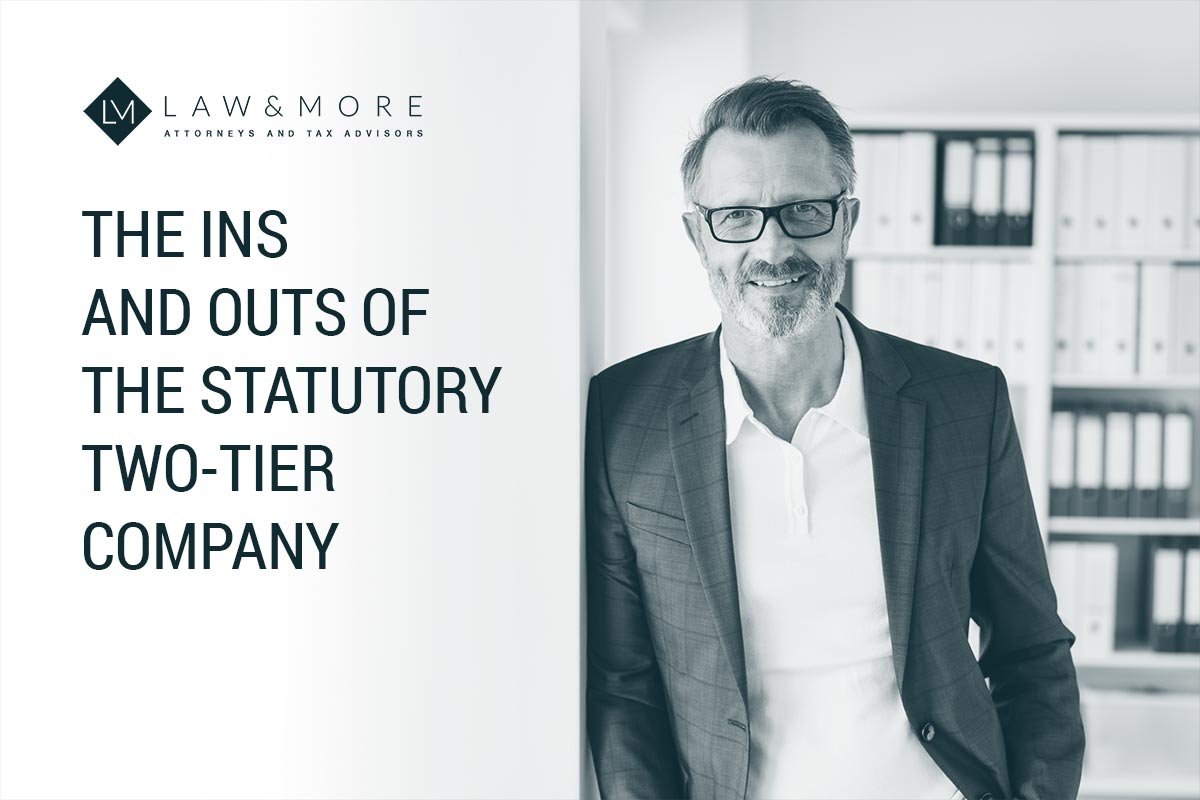 The objective of the statutory two-tier company

The statutory two-tier company was introduced into our legal system due to the development of share ownership in the middle of the last century. Where there used to be majority shareholders who were committed for the long term, it became more and more common (even for pension funds) to invest briefly in a company. As this also led to less involvement, the General Meeting of Shareholders (hereinafter ‘GMS’) was less able to supervise the management. This led the legislator to introduce the statutory two-tier company in the 1970s: a special form of business in which stricter supervision is sought in a balance between labour and capital. This balance is intended to be achieved by tightening the duties and powers of the Supervisory Board (hereinafter ‘SB’) and by introducing a Works Council at the expense of the power of the GMS.

Today, this development in shareholdership is still relevant. Because the role of many shareholders in large companies is passive, it can happen that a small group of shareholders take the lead in GMSs and exert a great deal of power over the management. The short duration of shareholdership encourages a short-term vision in which the shares must increase in value as quickly as possible. This is a narrow view of the company’s interests, as the company’s stakeholders (such as its employees) benefit from a long-term vision. The Corporate Governance Code speaks of ‘long-term value creation’ in this context. That is why the statutory two-tier company is still an important company form today, which aims to redress the balance of stakeholder interests.

Which companies are eligible for the structure regime?

The statutory two-tier rules (also called the structure regime or ‘structuurrregime’ in Dutch) are not immediately compulsory. The law sets requirements which a company must meet before application can become compulsory after a certain period (unless there is an exemption, which will be discussed below). These requirements are set out in section 2:263 of the Dutch Civil Code (‘DCC’):

What is a dependent company?

An important concept from these requirements is the dependent company. There is often a misconception that the statutory two-tier rules do not apply to the parent company, for example because it is not the parent company that has set up the Works Council but the subsidiary company. It is therefore also important to check whether certain conditions have been met in respect of other companies within the group.  These could count as dependent companies (according to article 2:152/262 DCC) if they are:

Finally, it is possible to apply the (full or mitigated) two-tier board system voluntarily. In that case, only the second requirement concerning the Works Council is applicable. The statutory two-tier rules are then applicable as soon as they are included in the company’s articles of association.

The formation of the statutory two-tier company

If the company meets the abovementioned requirements, it is legally qualified as a ‘large company’. This must be reported to the trade register within two months after the adoption of the annual accounts by the GMS. An omission of this registration counts as an economic offence. Furthermore, any legitimately interested party can request the court to make this registration. If this registration has been in the trade register continuously for three years, the structure regime is applicable. At that time, the articles of association must have been amended to facilitate this regime. The period for the application of the statutory two-tier rules does not start running until the registration has been made, even if the notification has been omitted. The registration may be interrupted in the interim if the company no longer meets the above requirements. When the company is notified that it does comply again, the period starts over from the beginning (unless the period was wrongfully interrupted).

The notification obligation does not apply in the case of a full exemption. If the structure regime is applicable, this will cease to exist without a run-off period. The following exemptions follow from the law:

There is also a mitigated or weakened structure regime for international groups, in which the SB is not authorised to appoint or dismiss management board members. The reason for this is that the unity and policy within the group with a statutory two-tier company is broken. This applies if one of the following cases arises:

The consequences of the structure regime

The power of small, activist and exclusively profit-oriented shareholders can be curtailed by the structure regime. This is because the SB, through the extension of its powers, can focus on a wider range of interests within the company’s interest, including the shareholder’s interest, which benefits the stakeholders in a broad sense as well as the continuity of the company. Employees also gain more influence in the company’s policy, because the Works Council appoints one third of the SB.

However, the statutory two-tier company can be disadvantageous if a situation arises which deviates from the short-term shareholder practice. This is because large shareholders, who previously enriched the company with their influence and long-term vision (as, for example, in family businesses), are limited in their control by the two-tier board system. This can also make the company less attractive to foreign capital. This is because the statutory two-tier company is no longer able to exercise the rights of appointment and dismissal – the most far-reaching exercise of this control – and (even in the mitigated regime) to exercise the right of veto on important management decisions. The remaining rights of recommendation or objection and the possibility of dismissal in the interim are only a pale shadow of this. The desirability of a statutory two-tier system therefore depends on the shareholder culture in the company.

Nevertheless, it is possible to make some arrangements to accommodate the shareholders of the company within the limits of the law. For example, although it is not possible in the articles of association to limit the approval of important management decisions by the SB, it is possible to require the approval of another corporate body (e.g. the GMS) for these decisions as well. For this, the normal rules for amending the articles of association apply. Besides a deviation in the articles of association, a contractual deviation is also possible. However, this is not advisable because it is not enforceable in company law. By making legally permissible amendments to the statutory two-tier rules, it is possible to find a way into the regime that suits the company, despite the mandatory application.

Do you still have questions about the structure regime after reading this article, or would you like customised advice on a structure regime? Then please contact Law & More. Our lawyers are specialised in corporate law and will be pleased to help you!