Blog » The Act on the electronic filing in commercial registers: how the government moves with the times

The Act on the electronic filing in commercial registers: how the government moves with the times

Helping international clients that have a business in the Netherlands is part of my daily practice. After all, the Netherlands is a great country to conduct a business in, but learning the language or getting used to the Dutch business practices can be at times complicated for foreign corporations. Therefore, a helping hand is often appreciated. The scope of my assistance ranges from assisting in complex tasks, to helping in communication with the Dutch authorities. Recently, I received a question from a client to explain what was exactly stated in a letter from the Dutch Chamber of Commerce. This simple, though important and informational letter concerned a novelty in the filing of financial statements, which will shortly only be possible electronically. The letter was a result of the desire of the government to move with the times, to utilize the advantages of electronic data exchange and to introduce a standardized way of handling this yearly recurring process. That is why the financial statements have to be deposited electronically from the financial year 2016 or 2017, as embodied in the Wet deponering in handelsregisters langs elektronische weg (the Act on the electronic filing in commercial registers), which was introduced together with the Besluit elektronische deponering handelsregisters (Resolution on the electronic filing in commercial registers); the latter providing additional, detailed rules. Quite a mouthful, but what exactly do this Act and Resolution entail? 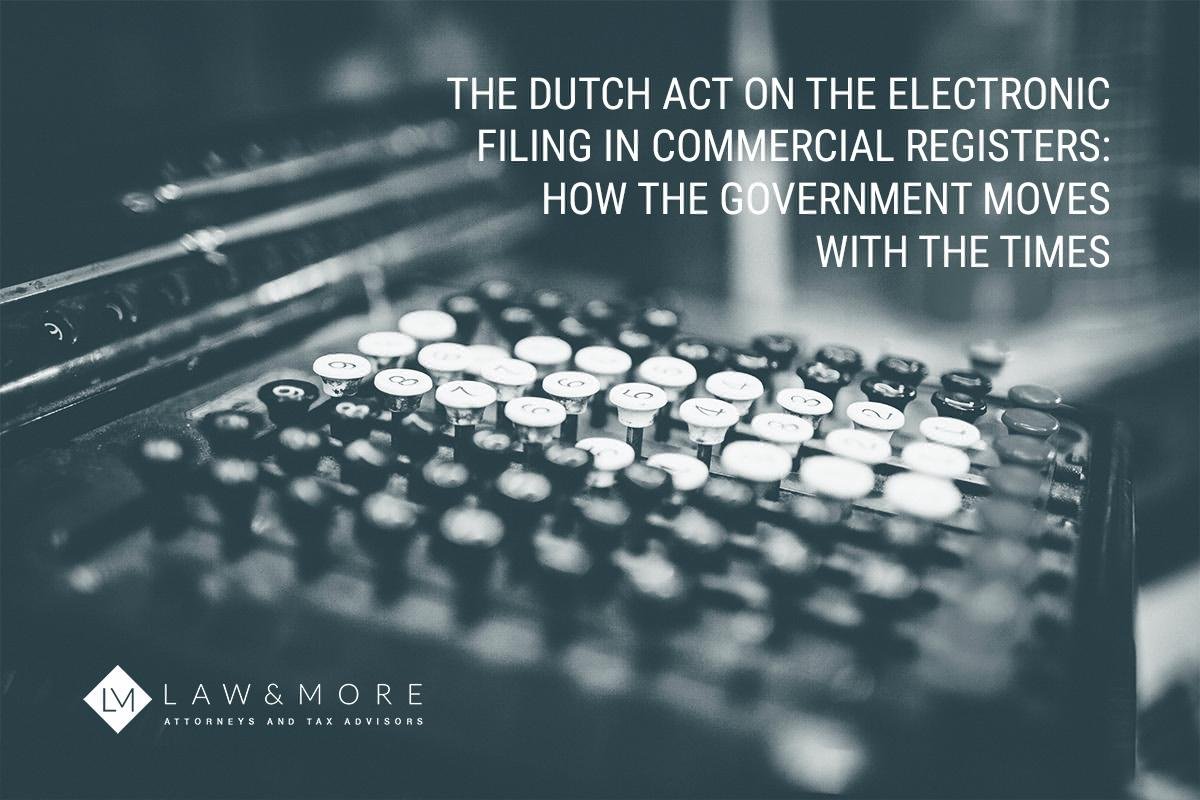 Previously, the financial statements could be deposited at the Chamber of Commerce both electronically and on paper. The Dutch Civil Code still largely knows provisions based on the deposit on paper. Presently, this method can be seen as outdated and I was actually a bit surprised that this development has not arisen earlier. It is not hard to imagine that the filing of financial statements on paper has a lot of disadvantages compared to the electronic filing of these documents when looking from a cost and time perspective. Think of costs for paper and the costs and time needed to put the annual statements on paper and submit them – also on paper – to the Chamber of Commerce, which then has to process these written documents, not even mentioning the time and costs that arise when letting an accountant draft or verify these (non-standardized) financial statements. Therefore, the government proposed to make use of “SBR” (short for: Standard Business Report), which is a standardized electronical method of creating and submitting financial information and documents, based on a catalogue of data (the Dutch Taxonomie). This catalogue contains definitions of data, which can be used to create the financial statements. Another advantage of the SBR-method is that not only the exchange of data between the corporation and the Chamber of Commerce will be simplified, but, as a result of the standardization, the exchange of data with third parties will become easier as well. Small corporations can already submit the annual statements electronically through the use of the SBR-method since 2007. For medium-sized and large businesses this possibility has been introduced in 2015.

So, when and for who?

No rules without exceptions

A rule wouldn’t be a rule if there were no exceptions to be made. Two, to be precise. The new rules concerning the filing of the financial statements are not applicable to legal entities and companies with a registered office outside the Netherlands, that, on the basis of the Handelsregisterbesluit 2008 (Commercial Register Resolution 2008), have the obligation to file the financial documents at the Chamber of Commerce, as far as and in the form in which these documents should be disclosed in the country of the registered office. The second exception is made for issuers as defined in article 1:1 of the Wft (Financial Supervision Act) and subsidiaries of an issuer, in case these are issuers themselves. An issuer is anybody that wishes to issue securities or intends to issue securities.

Other points of attention

Still, that is not all. Legal entities themselves need to take note of some additional aspects of importance. One of these aspects is the fact that the legal entity will remain responsible for the filing of financial statements that are in accordance with the law. Amongst others, this means that the financial statements should be able to create such an insight that one can sufficiently assess the financial position of the legal entity. I therefore advise every company to carefully check the data in the financial statements before they are filed at all times. Last but not least, pay attention to the fact that refusing to file the statements in the manner as prescribed, will constitute an offense on the basis of the Wet op de Economische Delicten (Economic Offence Act). Rather conveniently, it has been confirmed that the financial statements created through the SBR-method, can be used by the shareholders’ meeting to establish these statements. These accounts can also be subject to auditing by an accountant in accordance with article 2:393 of the Dutch Civil Code.

With the introduction of the Act on the electronic filing in commercial registers and the associated Resolution, the government has displayed a nice piece of progressiveness. As a result, it will become mandatory for small and medium-sized businesses to deposit the financial statements electronically from the years 2016 and 2017 respectively, unless the company falls within the scope of one of the exceptions. The advantages are numerous. Still, I advise all companies to keep their wits as the final responsibility still rests with the obliged-to-file companies themselves and as a company director, you most certainly do not want to be left dealing with the consequences.