In many national and international trade contracts, they often tend to arrange arbitrage to settle business disputes. This means that the case will be assigned to an arbitrator instead of a national court judge. For the implementation of an arbitration award to be completed, it’s required for the judge of the country of implementation to provide an exequatur. An exequatur implies the recognition of an arbitration award and equal to a legal judgement it can be either enforced or executed. The rules for the recognition and enforcement of a foreign verdict are regulated in the New York Convention.  This convention was adopted by an United Nations diplomatic conference on 10 June 1958 in New York. This convention was primarily concluded to regulate and facilitate the procedure of recognition and enforcement of a Foreign legal judgement between contracting states.

When it comes to the recognition and enforcement based on article V (1) of the New York  Convention, the judge is allowed to have discretionary power in exceptional cases. In principle, the judge is not allowed to examine or asses the content of a legal judgement in cases regarding recognition and enforcement. However, there are exceptions in relation to serious indications of essential defects on the legal judgement, so that it cannot be considered as a fair trial. Another exception to this rule is applicable if it is sufficiently plausible that in case of a fair trial, it would also have led to destruction of the legal judgement. The following important case of the High Council illustrates to what extent the exception can be used in daily practices. The main question is whether or not an arbitration award that has been destructed by the Russian legal court, can still pass the recognition and enforcement procedure in the Netherlands. 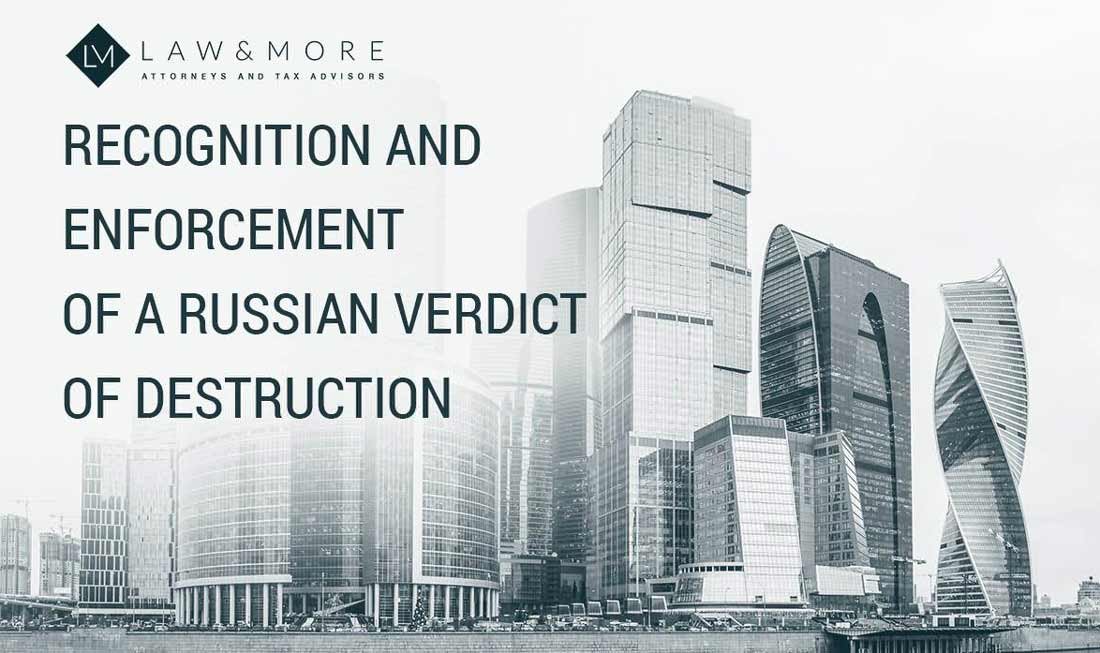 The case is about a Russian legal entity that is an internationally operating steel producer named OJSC Novolipetsky Metallurgichesky Kombinat (NLMK). The steel producer is the largest employer of the Russian region of Lipetsk. The majority of the shares of the company are owned by the Russian businessman V.S. Lisin. Lisin is also the owner of the transshipment ports at St. Petersburg and Tuapse. Lisin holds a high position at the Russian state company United Shipbuilding Corporation and also has interests in the Russian state company Freight One, which is a railway company. Based on the Purchase Agreement, which includes an Arbitration proceedings, both parties have agreed for the buying and selling of the NLMK shares of Lisin to NLMK.  After a dispute and late payments of the purchase price on behalf of NLKM, Lisin decides to bring the matter before the International Commercial Arbitration Court at the Chamber of Commerce and Industry of the Russian Federation and demands payment of the shares purchase price, which is according to him, 14,7 billion rubles. NLMK states in his defense that Lisin already received an advance payment which means that the amount of the purchase price has changed into 5,9 billion rubles.

The Arbitration court, where the case between Lisin and NLMK has been brought to matter, sentenced NLMK to pay remaining purchase price amount of 8,9 rubles and rejected both parties’ original claims. The purchase price is subsequently calculated based on half the purchase price by Lisin (22,1 billion rubles) and the calculated value by NLMK (1,4 billion rubles). With regard to the advanced payment the court sentenced NLMK to pay 8,9 billion rubles. An appeal against the decision by the Arbitration court is not possible and NLMK claimed, based on previous suspicions of fraud committed by Lisin, for destruction of the arbitration award by the Arbitrazh Court of the city of Moscow. That claim has been assigned and the arbitration award shall be destroyed.

Lisin will not stand for it and wants to pursue a preservation order on the shares held by the NLMK in its own capital of NLMK international B.V. in Amsterdam. The destruction of this verdict has made it impossible to pursue a preservation order in Russia. Therefore, Lisin request for recognition and enforcement of the arbitration award. His request has been denied. Based on the New York convention it is common for the competent authority of the country of whose justice system the arbitration award is based on (in this case the Russian ordinary courts) to decide within the national law, on de destruction of Arbitration awards. In principle, the court of enforcement is not allowed to evaluate these Arbitration awards. The Court in Interlocutory Proceedings considers that the arbitration award cannot be executed, because it no longer exists.

Lisin lodged an appeal against this judgement at the Amsterdam Court of Appeal. The Court considers that in principle a destructed arbitration award will usually not be taking into consideration for any recognition and enforcement unless it’s an exceptional case. There is an exceptional case if there are strong indications that the judgement of the Russian courts lacks essential defects, so that this could not be considered as a fair trial. The Amsterdam Court of Appeal does not consider this particular case as an exception.

Lisin lodged an appeal in cassation against this verdict. According to Lisin the court also failed to appreciate the discretionary power granted to the court based on article V(1)(e) that examines if a foreign destruction judgement can overrule the procedure of enforcement of an arbitration award in the Netherlands. The High Council compared the authentic English and French version of the Convention text. Both versions seem to contain a different interpretation concerning the discretionary power that is granted to the court. The English version of article V(1)(e) states the following:

The French version of article V(1)(e) states the following:

The discretionary power of the English version (‘may be refused’) seems broader than the French version (‘ne seront refusées que si’).  The High Council found many differing interpretations in other resources about the correct application of the convention.

The High Council fully shares the view of the Court of Appeal.  There can only be a special case according to the High Court when the destruction of the arbitration award is based on grounds which do not correspond with the refusal grounds of the article V (1).  Although the Dutch court is granted discretionary power in case of the recognition and enforcement, it still does not apply for a destruction judgment in this particular case. The objection made by Lisin has no chance of succeeding.

This judgement by the High Council gives a clear interpretation in which way article V (1) of the New York convention should be interpreted in case of the discretionary power granted to the court during the recognition and enforcement of a verdict of destruction. This means, in short, that only in particular cases a destruction of judgement can be overridden.