A bankruptcy application is a powerful tool for debt collection. If a debtor does not pay and the claim has not been disputed, a bankruptcy petition can often be used to collect a claim more quickly and cheaply. A petition for bankruptcy can be filed either by petitioner’s own request or at the request of one or more creditors. If there are reasons of public interest, the Public Prosecutor’s Office can also file for bankruptcy.

Why does a creditor file for bankruptcy?

If your debtor fails to pay and it does not look like that the outstanding invoice will be paid, you can file for your debtor’s bankruptcy. This increases the chance that the debt will (partly) be paid off. After all, a company in financial difficulties most of the time still has money in, for example, funds and real estate. In the event of bankruptcy, all of this will be sold for realisation of money to pay the outstanding invoices. A bankruptcy petition of a debtor is handled by a lawyer. A lawyer must ask the court to declare your debtor bankrupt. Your lawyer submit this with a bankruptcy petition. In most cases, the judge will decide directly at the court whether your debtor is declared bankrupt. 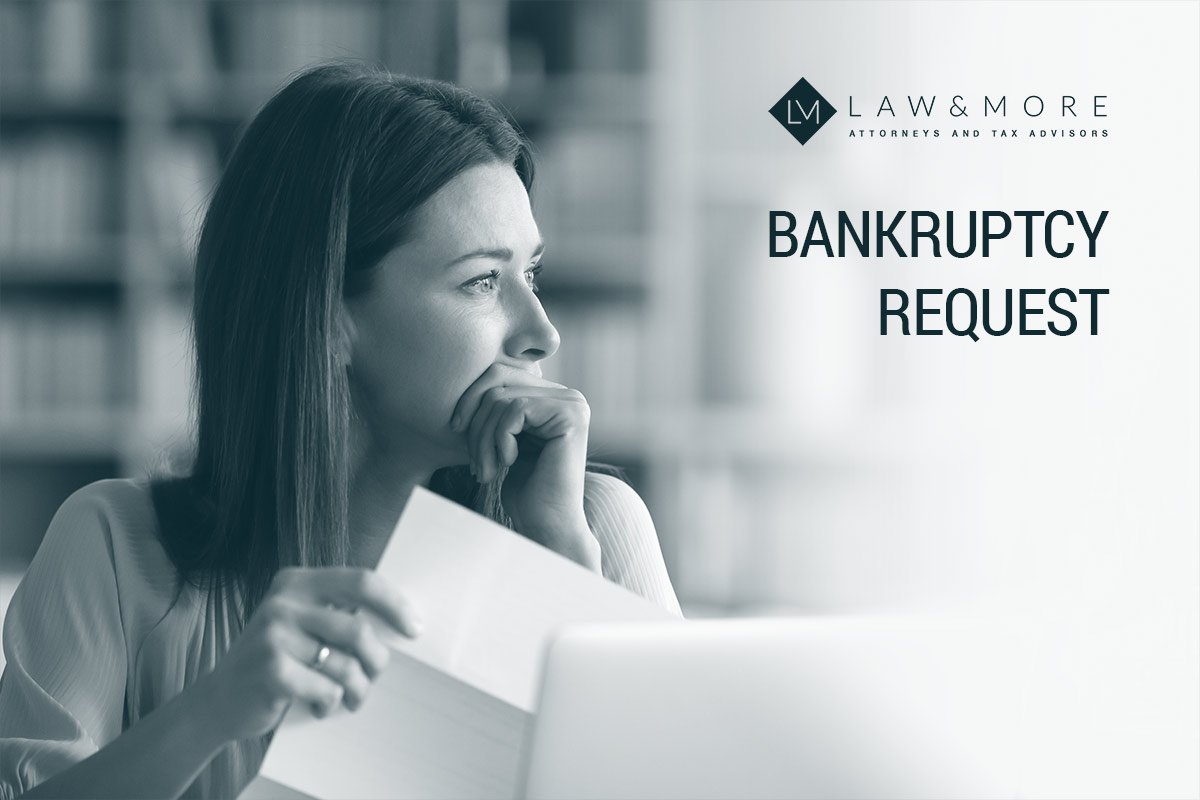 When do you apply?

You can file for bankruptcy if your debtor:

The question you often hear is whether an application for bankruptcy requires more than one creditor. The answer is no. A single creditor can also apply for the bankruptcy of a debtor. However, the bankruptcy can only be declared by the court if there are more creditors. These creditors do not necessarily have to be co-applicants. If an entrepreneur applies for the bankruptcy of his debtor, it is enough to prove during the processing that there are several creditors. We call this the ‘plurality requirement’. This can be done by statements of support from other creditors, or even by a declaration by the debtor that he is no longer able to pay his creditors. An applicant must therefore have ‘support claims’ in addition to his own claim. The court will verify this briefly and concisely.

In general, the court hearing in bankruptcy proceedings takes place within 6 weeks of the petition being filed. The decision follows during the hearing or as soon as possible thereafter. During the hearing, the parties may be granted a delay of up to 8 weeks.

For these proceedings you pay court fees in addition to the costs of a lawyer.

How does the bankruptcy procedure develop?

Bankruptcy proceedings start with the filing of a bankruptcy petition. Your lawyer starts the procedure by submitting a petition to the court asking for your debtor’s declaration of bankruptcy on your behalf. You are the petitioner.

The petition must be submitted to the court in the region where the debtor is domiciled. In order to apply for bankruptcy as a creditor, the debtor must have been summoned several times and eventually declared to be in default.

Invitation to the hearing

Within a few weeks, your lawyer will be invited by the court to attend the hearing. This notice will state when and where the hearing will take place. Your debtor will also be notified.

Does the debtor disagree with the bankruptcy petition? He or she can respond by submitting a written defence or an oral defence during the hearing.

It is not mandatory for the debtor to attend the hearing, but it is recommended. If a debtor does not appear, he can be declared bankrupt in a judgment in default.

You and/or your lawyer must appear at the hearing. If no one appears at the hearing the request may be rejected by the judge. The hearing is not public and the judge usually makes his decision during the hearing. If this is not possible, the decision will follow as soon as possible, usually within 1 or 2 weeks. The order will be sent to you and the debtor, and to the lawyers involved.

If you as a creditor, disagree with courts rejected decision, you can file an appeal.

If the court grants the request and declares the debtor bankrupt, the debtor can file for appeal. If the debtor appeals, the bankruptcy will take place anyway. With court’s decision:

After the bankruptcy has been declared by the court, the (legal) person who has been declared bankrupt will lose the disposal and management of the assets and will be declared unauthorised. The liquidator is the only one who is still allowed to act from that moment on. The liquidator will act in place of the bankrupt (the person declared bankrupt), manage the liquidation of the bankruptcy estate and look after the interests of the creditors. In the event of major bankruptcies, several liquidators may be appointed. For some acts, the liquidator has to request permission from the supervisory judge, for example in the case of the dismissal of staff and the sale of household effects or assets.

In principle, any income the debtor receives during the bankruptcy, will be added to the assets. In practice, however, the liquidator does this in agreement with the debtor. If a private individual is declared bankrupt, it is important to know what is covered by the bankruptcy and what is not. First necessities and part of the income, for example, are not included in the bankruptcy. The debtor may also perform ordinary legal acts; but the bankrupt’s assets are not bound by this. Furthermore, the liquidator will make the court’s decision public by registering it at the bankruptcy registry and the Chamber of Commerce, and by placing an advertisement in a national newspaper. The bankruptcy registry will register the judgment in the Central Insolvency Register (CIR) and publish it in the Government Gazette. This is developed in order to give other possible creditors the opportunity to report the liquidator and to submit their claims.

How will the assets be distributed?

Separatists are creditors with:

The bank has granted a credit with the condition that if no payment is made, it has the right of pledge, for example, on the business inventory or the stock.

The claim of a separatist (what the word already implies) is separate from a bankruptcy and can be claimed immediately, without first claiming it by a liquidator. However, liquidator may ask the separatist to wait for a reasonable period.

For you as a creditor, court’s decision has the following consequences:

If the debtor is a natural person, it is in some cases possible that after the bankruptcy, the debtor submits a request to the court for conversion of the bankruptcy into debt restructuring.

For the debtor, court’s decision has the following consequences:

How does bankruptcy procedure end?

Bankruptcy can end in the following ways:

Please note: A natural person can also be sued again for the debts, even after the bankruptcy has been dissolved. If a verification meeting has taken place, the law provides opportunity in an execution, because the report of the verification meeting gives you the right for an execution title that can be enforced. In such case, you no longer need a verdict to execute. Of course, the question remains; what can still be obtained after a bankruptcy?

What happens if a debtor does not cooperate during the bankruptcy proceedings?

The debtor is obliged to cooperate and to provide the liquidator with all necessary information. This is the so-called ‘obligation to inform’. If the liquidator is being obstructed, he can take enforcement measures such as a bankruptcy interrogation or a hostage-taking in a Detention Center. If the debtor has performed certain acts before the declaration of bankruptcy, as a result of which creditors have less chance of reclaiming debts, the liquidator can undo these acts (‘bankruptcypauliana’). This must be a legal act which the debtor (the later bankrupt) performed without any obligation, before the declaration of bankruptcy, and by performing this act the debtor knew or should have known that this would result in disadvantage for the creditors.

In case of legal entity, if the liquidator finds evidence that the directors have misused the bankrupt legal entity, they may be held privately liable. Moreover, about this you can read in our previously written blog: Liability of directors in The Netherlands.