In 2012, BV (private company) law was simplified and made more flexible. With the entry into force of the Law on Simplification and Flexibility of BV Law, shareholders were given the opportunity to regulate their mutual relationships, so that more room was created to adapt the structure of the company to the nature of the company and the cooperative relationship of the shareholders. In line with this simplification and flexibilization of BV law, the modernization of NV (public limited company) law is now in the pipeline. In this context, the legislative proposal Modernizing NV law and a more balanced male / female ratio aims first of all to make NV law simpler and more flexible, so that the current needs of many large public limited (NV) companies, whether listed or not, can be met. In addition, the legislative proposal aims to make the ratio between the number of men and women at the top of large companies more balanced. The changes that entrepreneurs can expect in the near future with regard to the two themes just mentioned are discussed below. 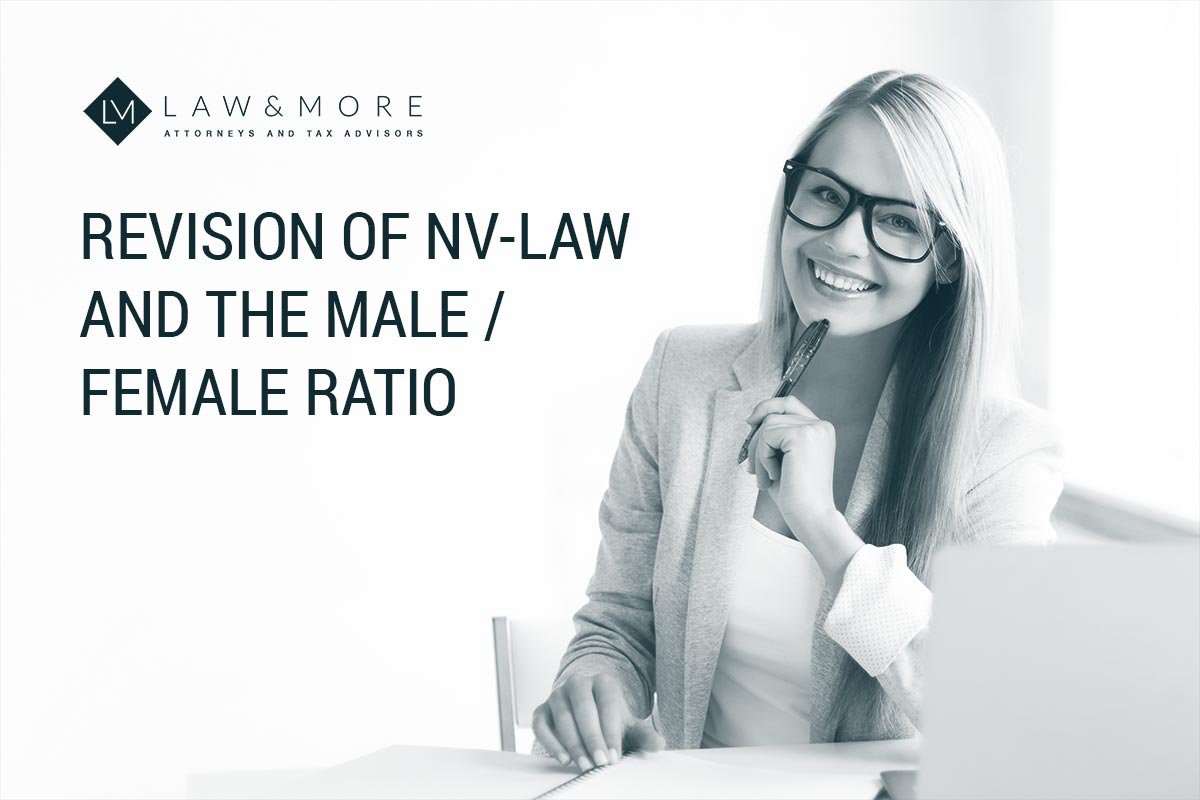 The subjects for revision of NV law

The revision of NV law generally pertains to the rules that entrepreneurs experience in practice as unnecessarily restrictive, according to the explanatory notes to the proposal. One of such bottlenecks is, for example, the position of minority shareholders. Due to the great freedom of organization that currently exists, they run the risk of being disadvantaged by the majority, since they have to comply with the majority, especially when it comes to decision-making in a general meeting. In order to prevent the important rights of (minority) shareholders from being at stake or the interests of the majority shareholders being abused, the Modernization NV Law proposal protects the minority shareholder by, for example, requiring his consent.

Another bottleneck is the mandatory share capital. On this point, the proposal provides an easing, that is to say that the share capital laid down in the articles of association, being the sum of the nominal values ​​of the total number of shares, will no longer be mandatory, just as with the BV. The idea behind this is that with the abolition of this obligation, entrepreneurs who use the legal form of a public limited company (NV) will have more room to raise capital, without the statutes having to be amended first. If the articles of association do state a share capital, a fifth of this must have been issued under the new regulation. The absolute requirements for the issued and paid-up capital remain unchanged in terms of content and must both amount to € 45,000.

In addition, a well-known concept in BV law: shares of a specific designation will also be placed in new NV law. A specific designation can then be used to attach specific rights to shares within one (or more) classes of shares, without the need to create a new class of shares. The exact rights involved will have to be specified further in the articles of association. In the future, for example, the holder of ordinary shares with a special designation can be granted a special controlling right as described in the articles of association.

Another important point of NV-law, the amendment of which is included in the proposal, concerns the voting rights of pledgees and usufructuaries. The change is due to the fact that it will also be possible to grant the voting right to a pledgee or usufructuary at a later time. This amendment is also in line with current BV law and, according to the explanatory notes to the proposal, meets the need that has apparently been in practice for some time. In addition, the proposal aims to further clarify in this context that the granting of the voting right in the case of a right of pledge on shares can also take place under a suspensive condition upon establishment.

In addition, the Modernization of NV Law proposal contains a number of changes regarding decision-making. One of the important changes concerns, for example, decision-making outside the meeting, which is particularly important for the NVs that are connected in a group. Under current law, resolutions can only be taken outside a meeting if the articles of association allow this, it is not possible at all if the company has bearer shares or has issued certificates and a resolution must be taken unanimously. In the future, with the entry into force of the proposal, decision-making outside the meeting will be possible as a starting point, provided that all persons with meeting rights have agreed to this. Moreover, the new proposal also holds the prospect of meeting outside the Netherlands, which is beneficial for entrepreneurs with internationally operating NVs.

Finally, the costs related to incorporation are discussed in the proposal. With regard to this, the new proposal on Modernization of NV Law opens the possibility that the company will be bound to pay these costs in the deed of incorporation. As a result, the separate ratification of the relevant acts of incorporation by the board is circumvented. With this change, the obligation to declare the formation costs to the Commercial Register could be deleted for the NV, just as it happened with the BV.

In recent years, the promotion of women at the top has been a central theme. However, research into the results has shown that they are somewhat disappointing, so that the Dutch cabinet feels compelled to use this proposal to promote the aim of more women at the top of the business community with the Modernization of NV law and male / female ratio. The idea behind this is that diversity in the top companies can lead to better decisions and business results. In order to achieve equal opportunities and starting position for everyone in the business world, two measures are taken in the relevant proposal. Firstly, large public limited companies will also be required to formulate appropriate and ambitious target figures for the management board, the supervisory board and sub-top. In addition, according to the proposal, they must also make concrete plans to implement these and be transparent about the process. The male-female ratio in the supervisory board of listed companies must grow to at least one third of the number of men and one third of the number of women. For example, a supervisory board of three persons is composed in a balanced manner if it includes at least one man and one woman. In this context, for example, the appointment of a supervisory board member who does not contribute to a representation of at least 30% m / f, this appointment is null and void. This does not mean, however, that the decision-making in which an invalidated supervisory board member participated is affected by the nullity.

In general, revision and modernization of NV law means a positive development for the company that meets the existing needs of many public limited companies. However, this does not alter the fact that a number of things will change for companies that use the legal form of a public limited company (NV). Would you like to know what these upcoming changes mean in concrete terms for your company or what is the situation of the male / female ratio within your company? Do you have any other questions about the proposal? Or do you simply want to stay informed about the modernization of NV law? Then contact Law & More. Our lawyers are experts in the field of corporate law and are happy to provide you with advice. We will also keep an eye on further developments for you!