Expressing your opinion or criticisms is in principle not a taboo. However, this does have its limits. Statements should not be unlawful. Whether an statement is unlawful will be judged per specific situation. In the judgment a balance is made between the right to freedom of expression on the one hand and the right to the protection of one’s honour and reputation on the other hand. Insulting persons or entrepreneurs always has a negative connotation. In some cases, an insult is considered unlawful. In practice, there is often talk of two forms of insult. There may be defamation and/or slander. Both defamation and slander deliberately put the victim in a bad light. What slander and defamation exactly mean is explained in this blog. We will also look at the sanctions that can be imposed against a person who is guilty of defamation and/or slander. 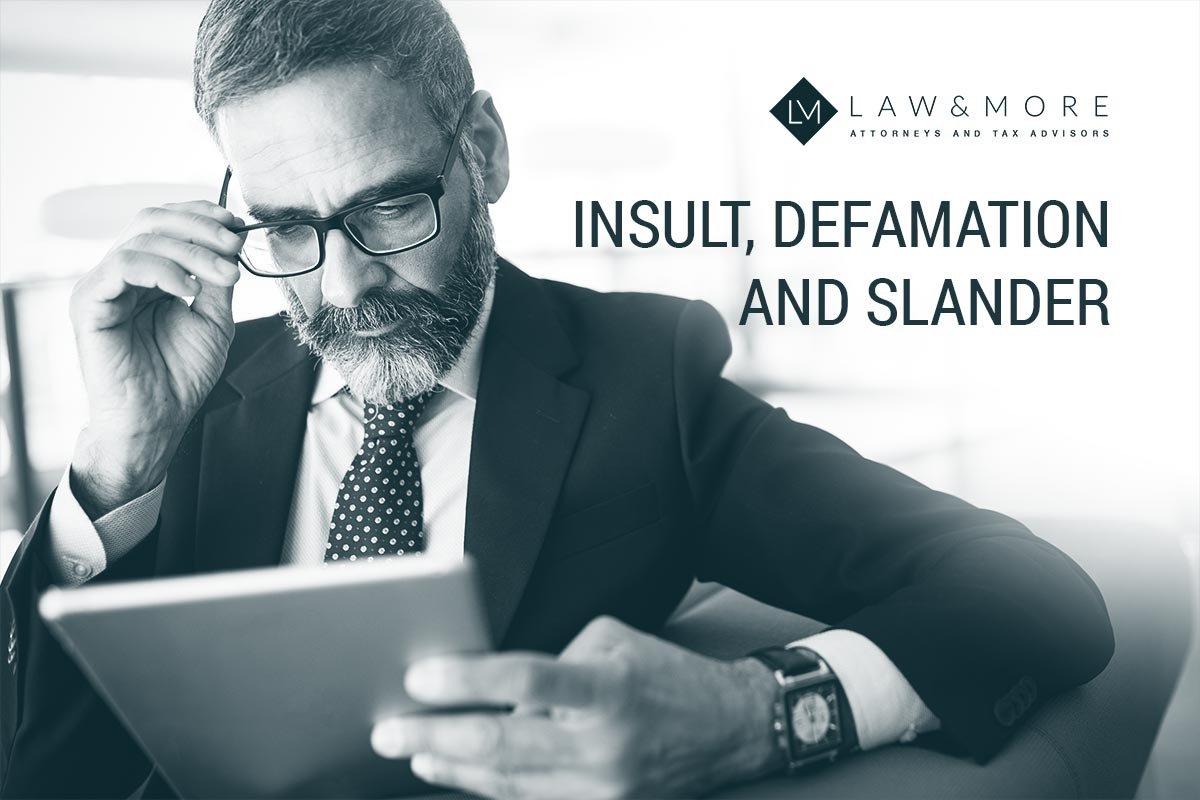 “Any intentional insult not covered by defamation or slander” shall be qualified as a simple insult. A characteristic of insult is that it is a complaint offence. This means that the accused can only be prosecuted when the victim has reported it. Insult is usually only seen as something that is not tidy, but if you are well aware of your rights, in some cases you can ensure that the person who has insulted you may be prosecuted. However, it often happens that the victim does not report insult because he or she may experience more disadvantages in relation to the publicity of the case.

When it is a matter of deliberately assaulting someone’s honour or good name, with the aim of publicising it, then that person is guilty of defamation. Deliberate assault means that someone’s name is deliberately put in a bad light. By intentional assault, the legislator means that you are punishable if you deliberately say bad things about an individual, a group or an organisation, with the aim of publicising it. Defamation can take place verbally as well as in writing. When it takes place in writing, it is qualified as a defamatory note. The motives for a defamation are often revenge or frustration. An advantage for the victim is that the defamation committed is easier to prove if it is in writing.

Slander is spoken of when someone is deliberately slandered by making public statements, of which he knows or should have known that the statements are not based on truth. Slander can therefore be seen as accusing someone by means of lies.

Accusation must be based on facts

An important question that is being looked at in practice is whether, and if so to what extent, the accusations found support in facts that were available at the time of the statements. The judge therefore looks back at the situation as it was at the time the statements in question were made. If certain statements seem unlawful to the judge, he will rule that the person who made the statement is liable for the damage resulting therefrom. In most cases, the victim is entitled to compensation. In the event of an unlawful statement, the victim can also request rectification with the help of a lawyer. Rectification means that an unlawful publication or statement is rectified. In short, a rectification states that a previous message was incorrect or unfounded.

In case of insult, defamation or slander, the victim has the possibility to go through both civil and criminal proceedings. Through civil law, the victim can claim compensation or rectification. Because defamation and slander are also criminal offences, the victim can also report them and demand that the perpetrator be prosecuted under criminal law.

Insult, defamation and slander: what are the sanctions?

Simple insult can be punishable. A condition for this is that the victim must have made a report and the Public Prosecution Service must have decided to prosecute the suspect. The maximum sentence that the judge can impose is three months imprisonment or a fine of the second category (€ 4,100). The amount of the fine or (imprisonment) penalty depends on the seriousness of the insult. For example, discriminatory insults are punished more severely.

Defamation is also punishable. Here again, the victim must have made a report and the Public Prosecution Service must have decided to prosecute the accused. In case of defamation the judge can impose a maximum detention of six months or a fine of the third category (€ 8,200). As in the case of insult, the seriousness of the offence is also taken into account here. For example, defamation against a civil servant is punished more severely.

An attempt at defamation and/or slander is also punishable. By ‘attempted’ is meant that an attempt has been made to commit defamation or slander against another person, but this has failed. A requirement for this is that there must be a beginning of the crime. If such a start has not yet been made, there is no punishability. This also applies when a start has been made, but the perpetrator decides of his own accord not to commit slander or defamation after all.

Do you have to deal with insult, defamation or slander? And do you want more information about your rights? Then do not hesitate to contact Law & More lawyers. We can also help you if you are being prosecuted by the Public Prosecution Service yourself. Our expert and specialised lawyers in the field of criminal law will be happy to provide you with advice and assist you in legal proceedings.